The AGM was well attended by the members and we also welcomed the Town Mayor of Romsey and the Mayor of Test Valley, who are our Honorary Vice Presidents. The Chairman, John Twigg, gave a vote of thanks to the retiring Vice Chairman, Rev. John Clarke and thanked him for all his support and hard work. The new Vice Chairman is Roger Rowe, who is also Membership Secretary. Dick Hewett has taken on the Chair of the Events Committee. All the Trustees were thanked for their support and work during the past year. 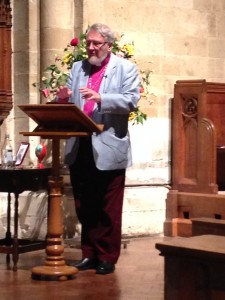 Rev Canon Tim Sledge introduced our speaker: The Rt Revd. Geoffrey Rowell who had been the third Bishop in Europe from 2001 to 2013. He is currently Assistant Bishop in the Diocese of Chichester. During his talk he gave the Friends an insight into some of the challenges and joys he experienced during his work as Bishop of Gibraltar. Many of these challenges due to the vastly different cultures and ethnic backgrounds of the churches under his care which stretched from Gibraltar to Kazakhstan and included Christian communities from France, Germany, Italy, Malta, Eastern Europe and Northwest Europe. Following his talk the Bishop answered a number of questions.

Thanking him for a most enlightening talk John Twigg said he was sure few present had any idea of the challenging role played by the Bishop of Gibraltar both in theological and diplomatic skills prior to this evening. 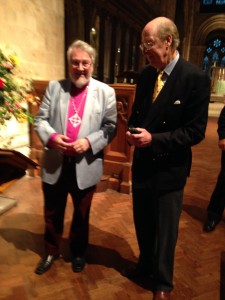 The Friends of Romsey Abbey are 345 strong, made up of people who love and support the Abbey. Recent visits include Bletchley Park and a cruise on the Basingstoke Canal. Coming up we have a three day visit to York and a day out to Wimborne. There are regular Coffee Mornings, talks and an Annual Dinner at Berties. If you are interested in becoming a Friend then please contact John Twigg the Chairman, 01794 521966 or Jill Hall, Secretary 02380 731640 or email office@romseyabbeyfriends.org