The fog had lifted by the time a group of 19 led by John Twigg left the Abbey for Gosport via the M27, in two TVBC mini-buses driven by Tim Rogerson and Dick Hewett.

We duly arrived at the  R.N. Submarine Museum at about 10.15 a.m. and made our way tothe reception building. John announced that we were to assemble for a conducted  tour of H.M.S. Alliance at 11.10 so we proceeded to pass the time inspecting the many interesting artefacts on display in the museum. These included stepping  aboard  Holland 1  the Royal Navy’s first submarine built in 1901 and salvaged from the deep a few years ago, peering into X24 the only remaining  midget submarine to have served in WW2 and watching a film on personal  recollections from submariners whom served in the South Atlantic in 1982.

At 11.10 we went aboard Alliance, our tour guide was Jim Hugman who had been a submariner chef. We walked nearly the length of the sub through sleeping quarters, mess rooms, the minute galley that supplied 3 meals a day for 60 crew, the control platform with two periscopes  and then into the engine room . Here there were two 6 cylinder diesel engines in tandem that drove the vessel when on the surface, and also the generator to charge the batteries for the electric motor for underwater propulsion.

One could only imagine the noise and atmosphere from diesel fumes and  I think that  everyone enjoyed Jim’s stories of life in a submarine.

About noon we left Alliance and as we had 45mins. before we caught the water taxi we either  visited the café or continued our tour of the museum.

At 12.45 we embarked on the “Jenny R” water taxi which was to take us to the Explosion Museum with stops at Gunwharf Quay, where we had a good view of the Spinnaker Tower now bathed in glorious sunshine and at H.M.S. Warrior. Finally we arrived at Priddy’s Yard which since 1771 had been the R.N. Armaments Depot.

Here we experienced an audio-visual interactive show, otherwise known as “musical chairs”! After another tea break in the sun we were treated to a real experience when John Coker, a retired armaments technician gave us an in depth history of naval weapons from cannons to Exocet missiles.

A most enjoyable day  ended with a return trip through Stokes Bay and  Stubbington, our thanks to Dick and Tim for the transport and most of all to John for arranging the programme. 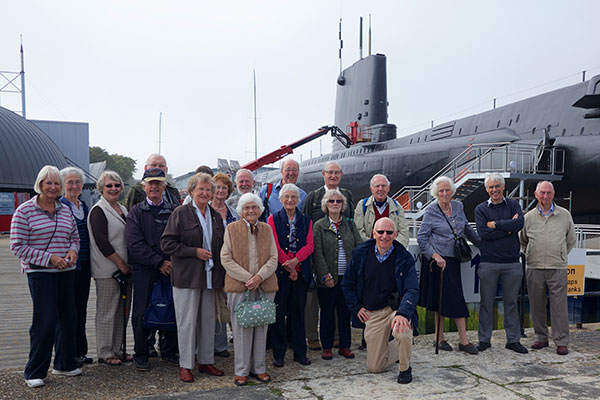