On 4 April 2016 a group of 31 Friends went on our first outing of the year, to the Kennet & Avon Canal. Two very contrasting visits made up the day, which was led by Colin and Rosemary Davis. In the morning we were given a guided tour of a museum at Crofton housing two coal-fired beam engines dating back to 1812 that were used to pump water from a reservoir up into the summit pound of the canal. The engines can still be used and the museum volunteers had been chartered the previous week to fire up the engines because the navigation authority’s electric pump had broken down. 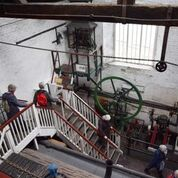 In the afternoon in the village of Kintbury our Friends boarded a horse-drawn trip boat for a 2 hours long cruise along the canal and through one of its 104 locks. This was a most relaxing experience, cruising silently behind Monty and his 1 horse power. 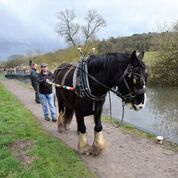 As is traditional on Friends’ outings, matters gastronomic were not ignored, with coffee and delicious home-made cakes at Crofton in the morning followed by a superb pub lunch at Wilton and then tea and snacks on the boat. It was a very enjoyable day.